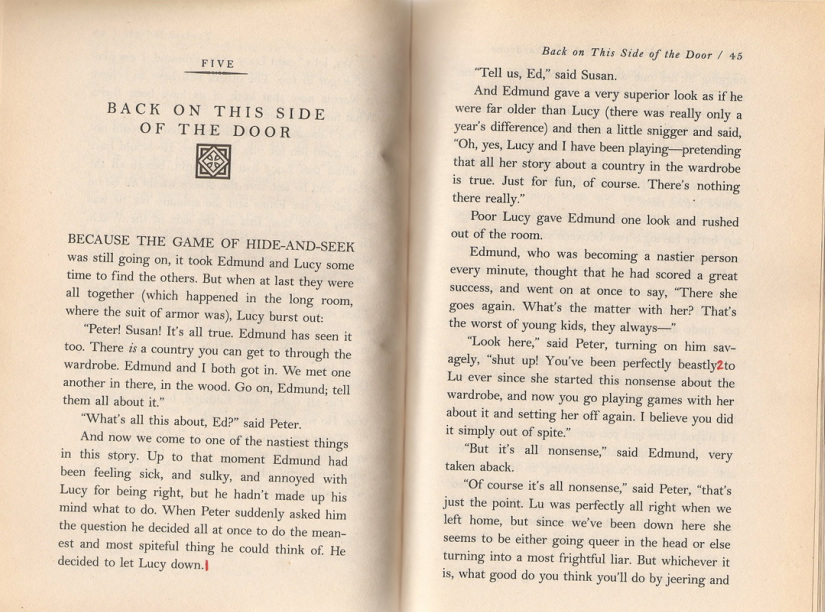 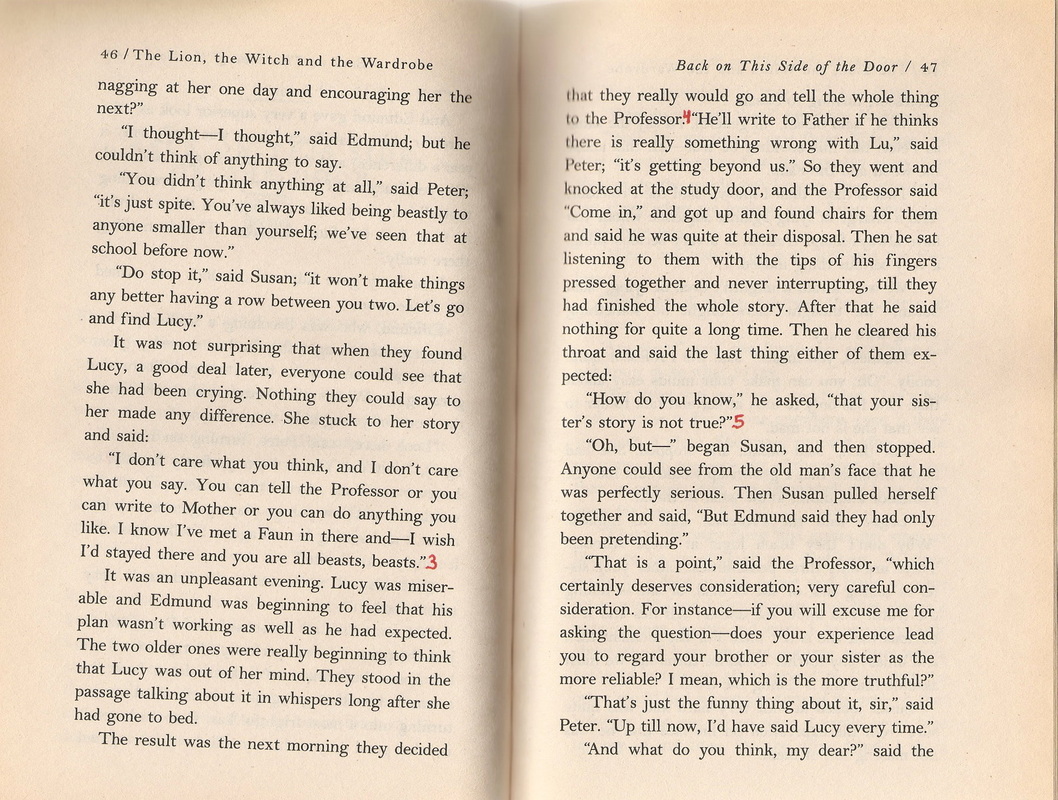 3.     Lewis again uses the word beast as Lucy describes her three siblings.  This word choice is very strong because it implies that the siblings do not possess human qualities of love and compassion.
4.     During World War II, Lewis allowed three schoolgirls to stay at his home for safety, so the relationship between children and professor may be based in his own experiences.
5.     Lewis’s own journey to find Christianity was based in a lot of questioning of whether God was real or not. 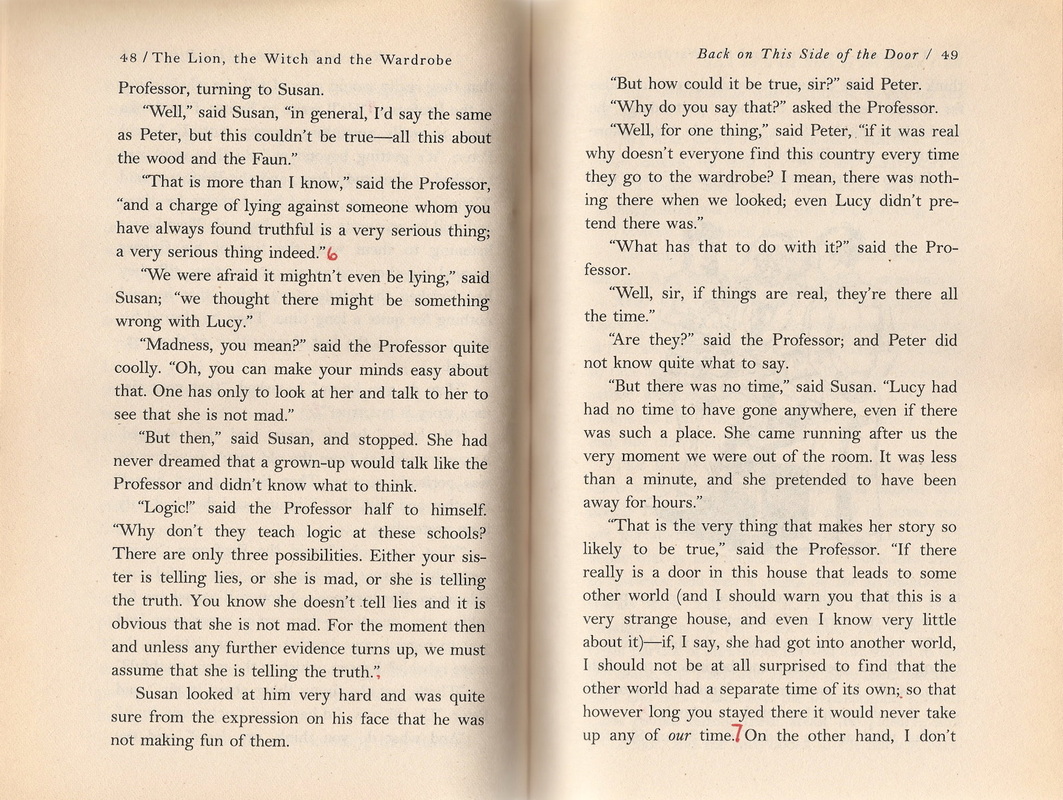 6.     The professor approaches the situation in a very logical manner, showing that he is an extremely wise person.
7.     Lewis’s use of time is likely influenced by his relationship with Tolkien, as they sometimes discussed time and space in the literary sense. 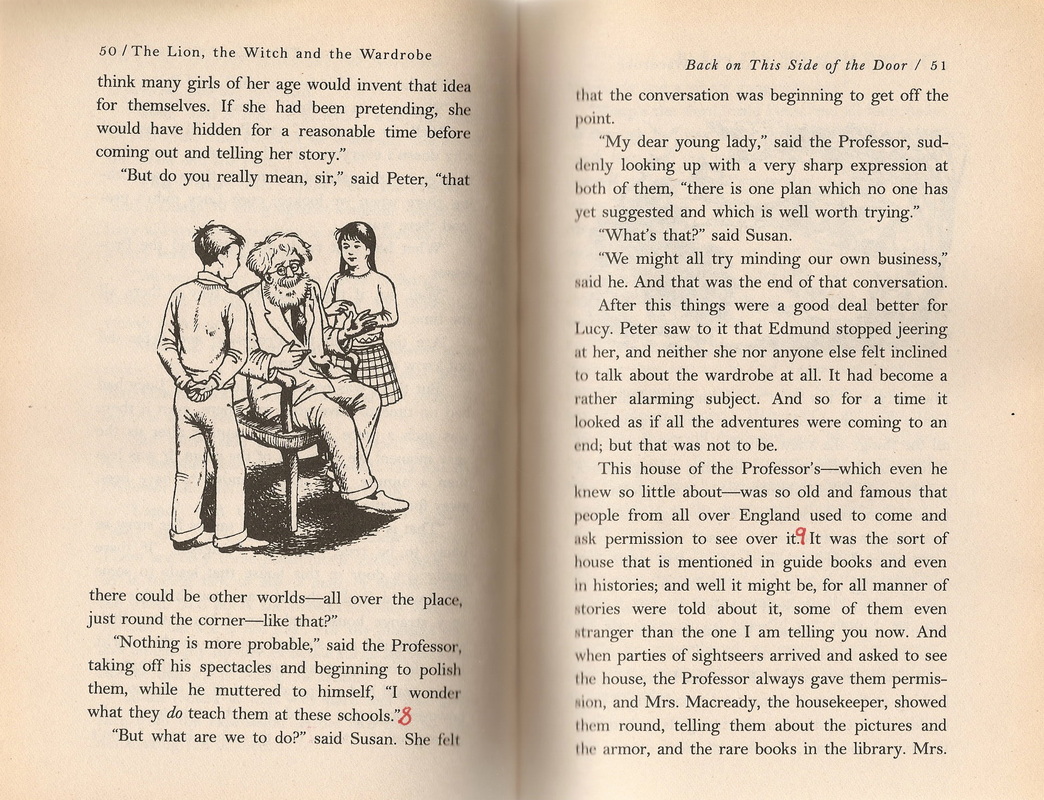 8.     Lewis was educated in an era that placed value on rote memorization, while the rigor of that process was lessened by the time the three refugee schoolgirls were residing in his house.
9.     Lewis’s house, Kilns, is a popular destination that is visited by many tourists. 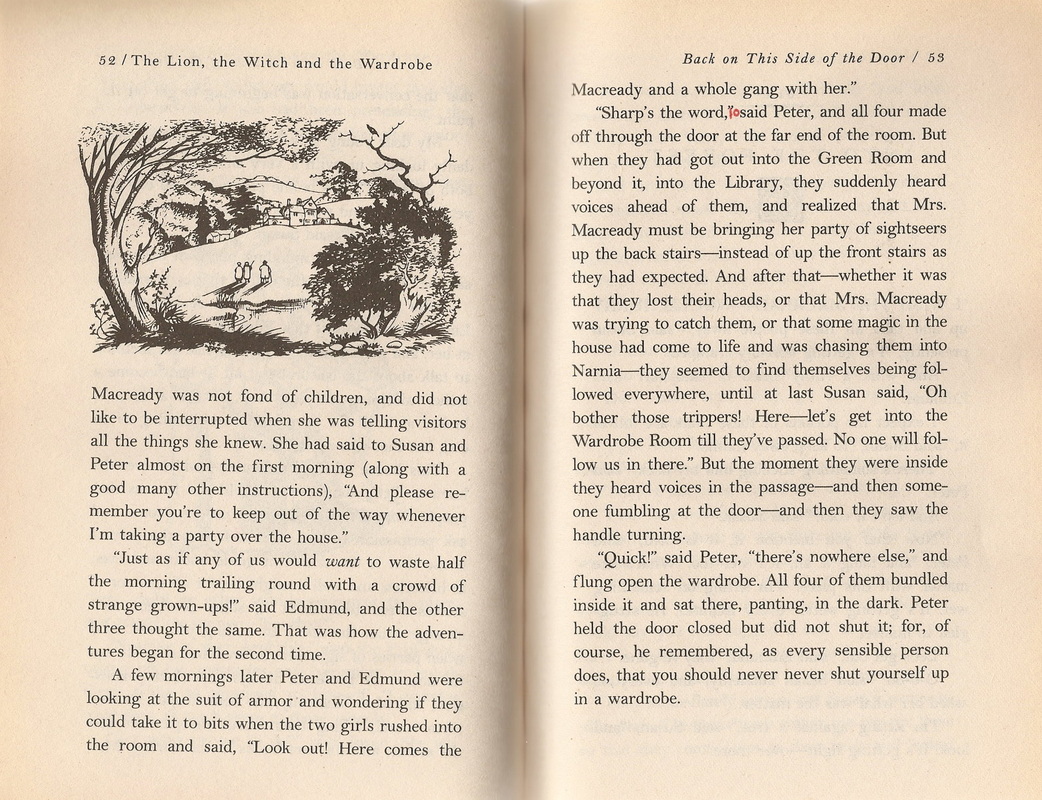 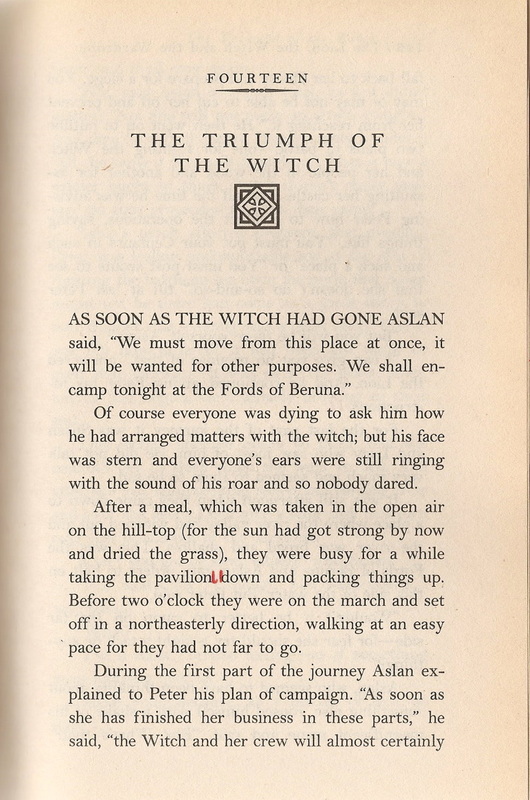 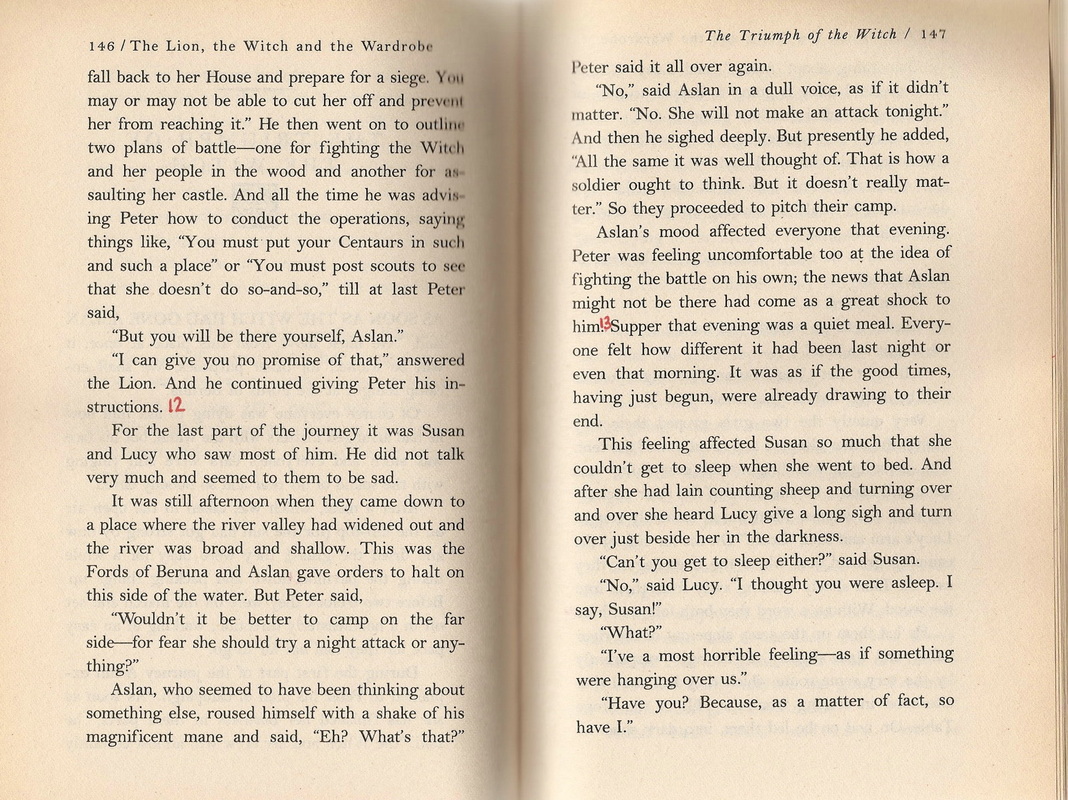 12.     Like Jesus instructing his apostles at the Last Supper, Aslan has many instructions for Peter.
13.     In a similar way to how the disciples felt about Jesus, Peter does not feel prepared to go into battle without the physical presence of Aslan. 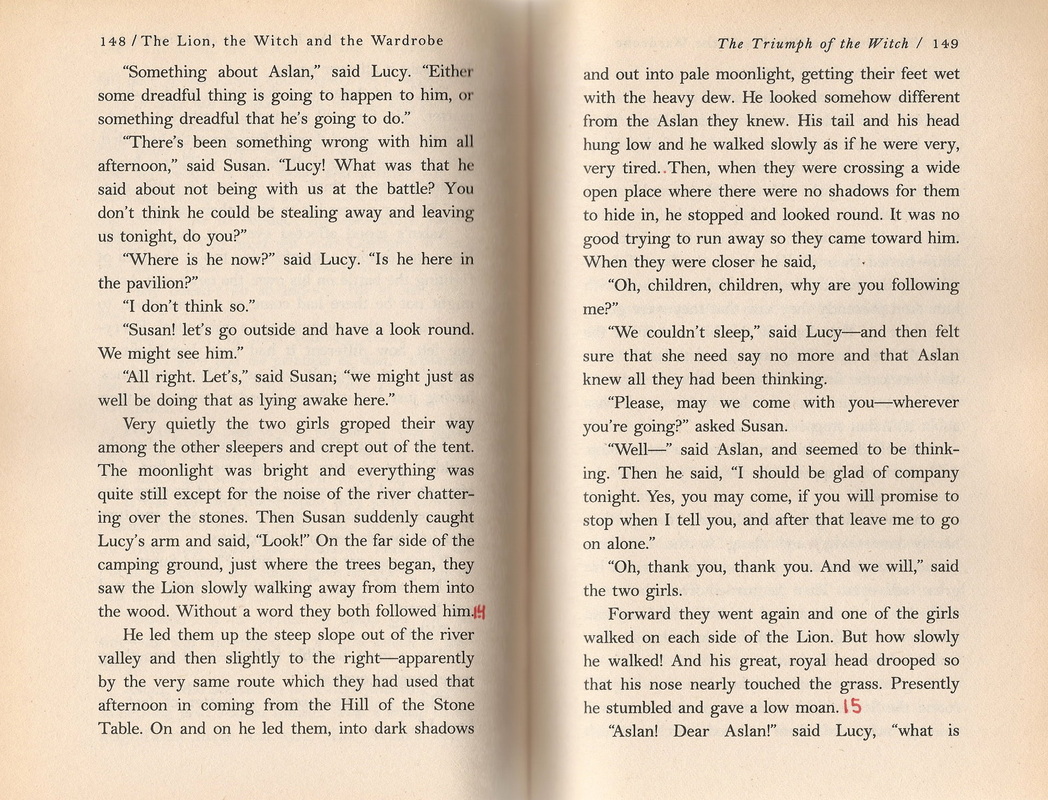 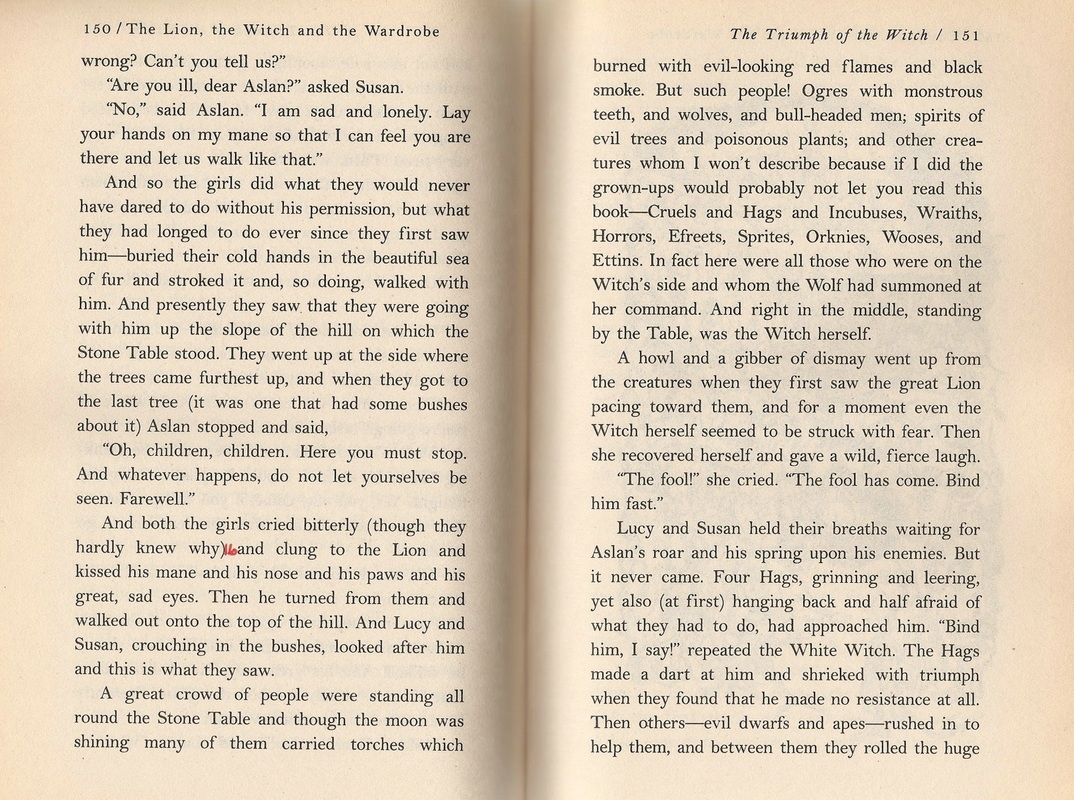 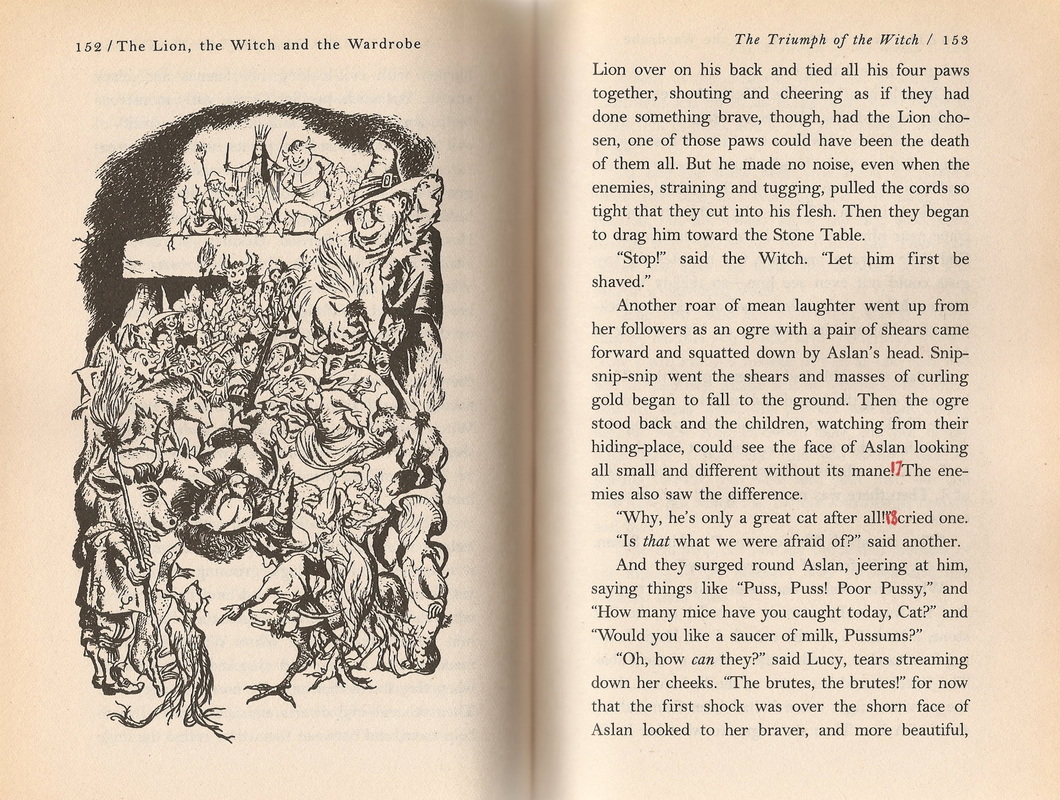 17.     Jesus’ image was also altered during his crucifixion, as he is adorned with a crown of thorns and a robe to look like a king.
18.     By calling Aslan a great cat, they are mocking his power, as Jesus was mocked by being called the Messiah in a sarcastic manner. 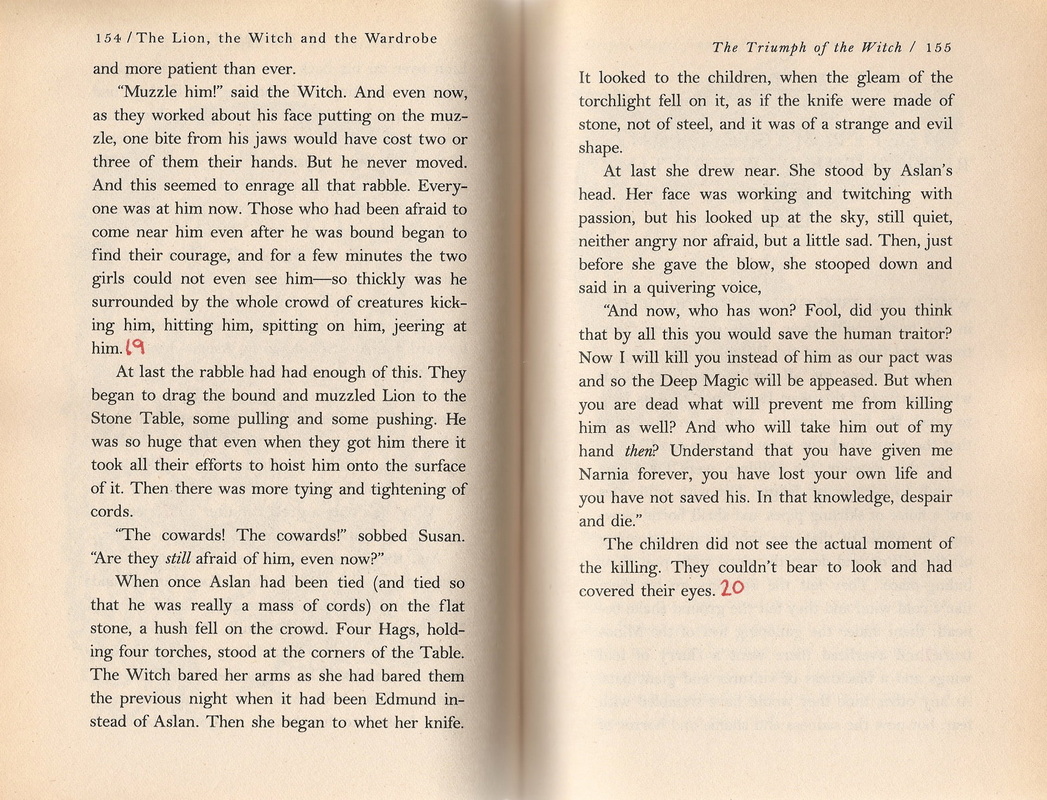 19.     The crowd and soldiers at the crucifixion tormented Jesus in a similar way.
20.     By not describing the moment of death, Lewis makes the book more appropriate for its child audience. 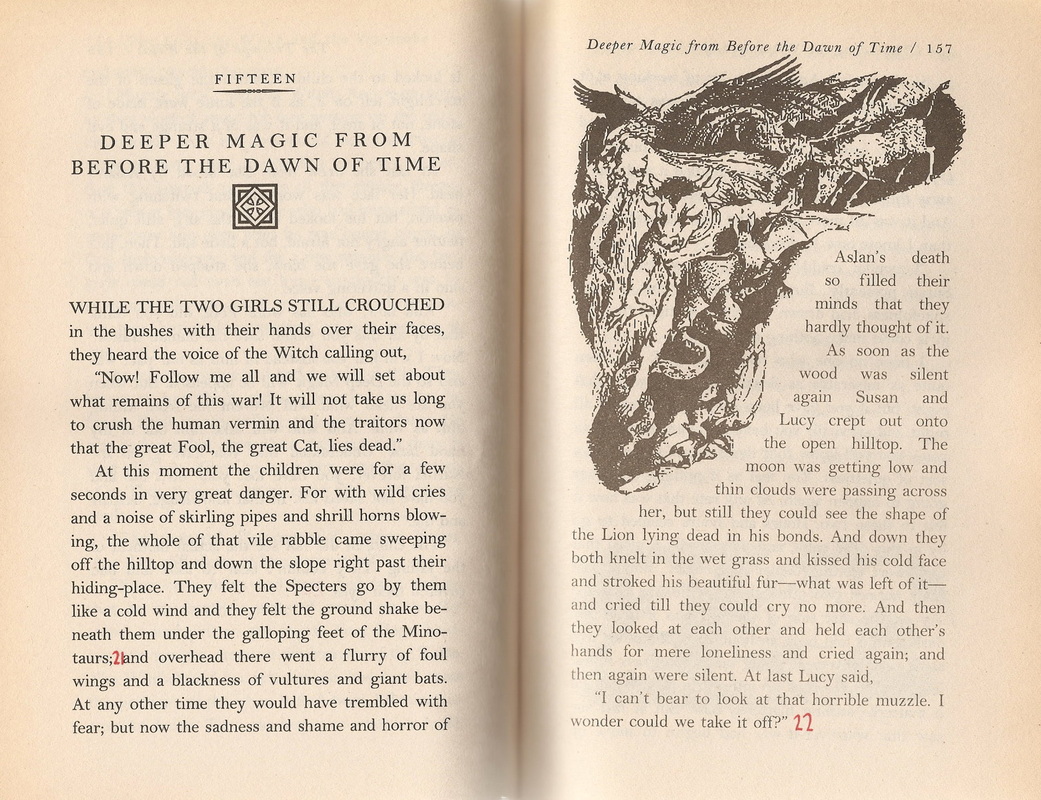 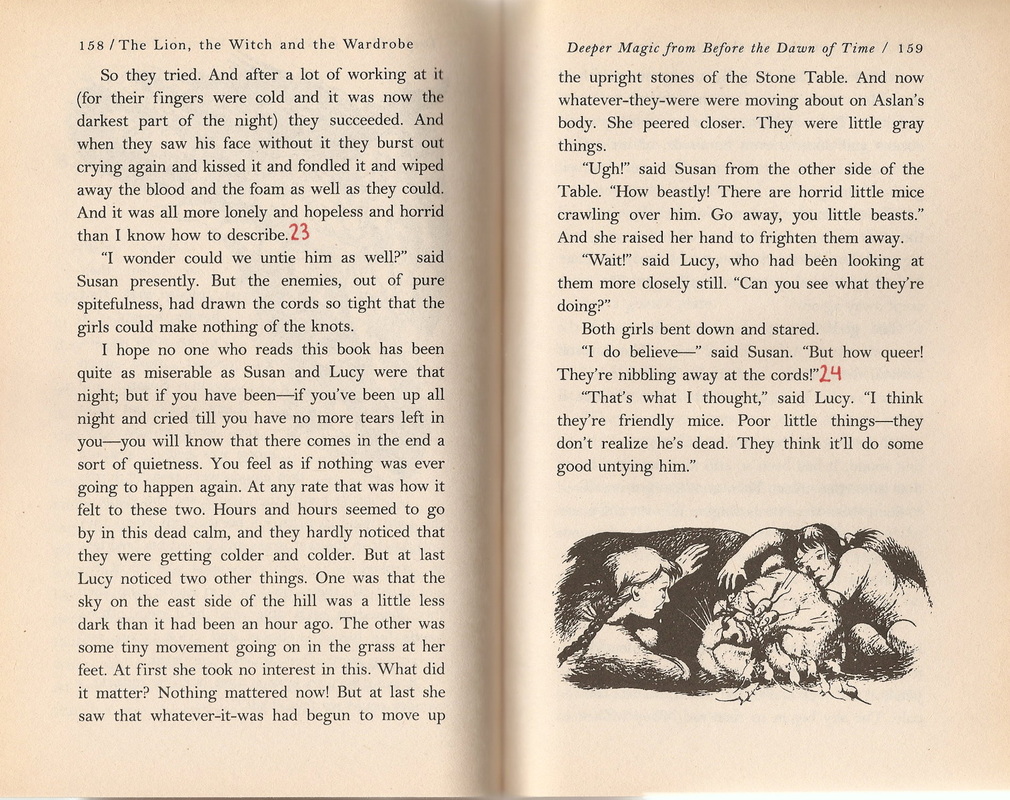 23.     Lewis encountered several deaths in his early life, including that of his beloved mother, likely helping him to be able to describe this feeling.
24.     This also occurs in the Aesop’s Fable, The Lion and the Mouse, where a mouse saves the life of a lion by chewing the ropes that keep him captured in a net. 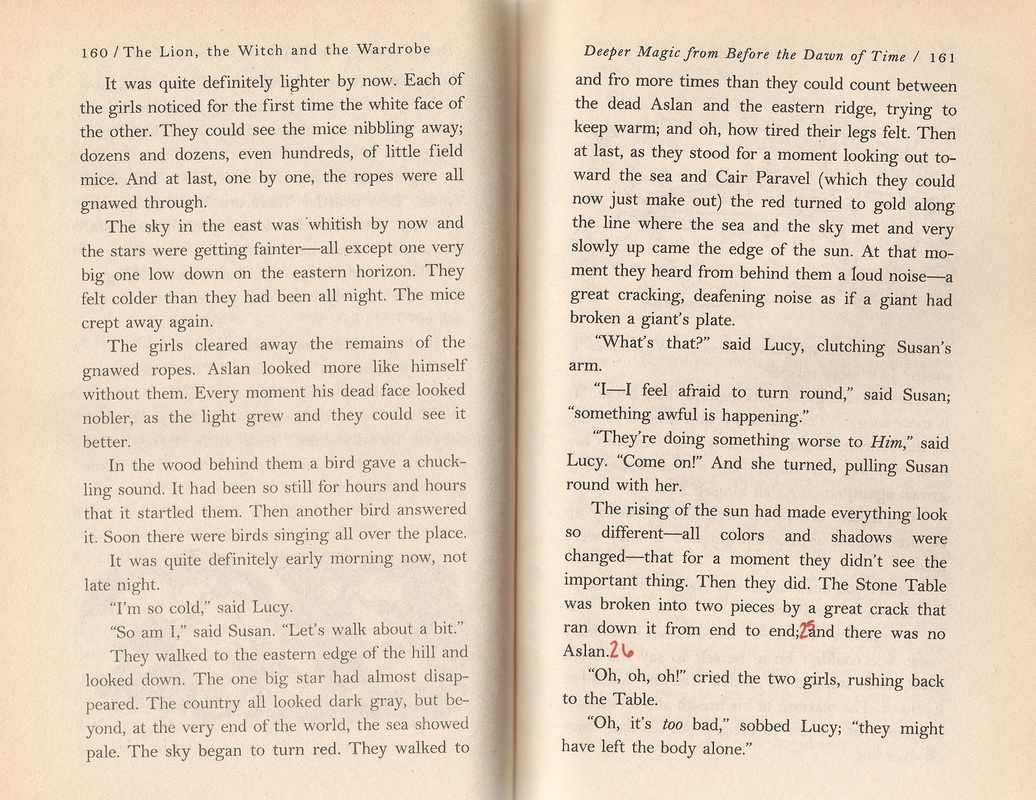 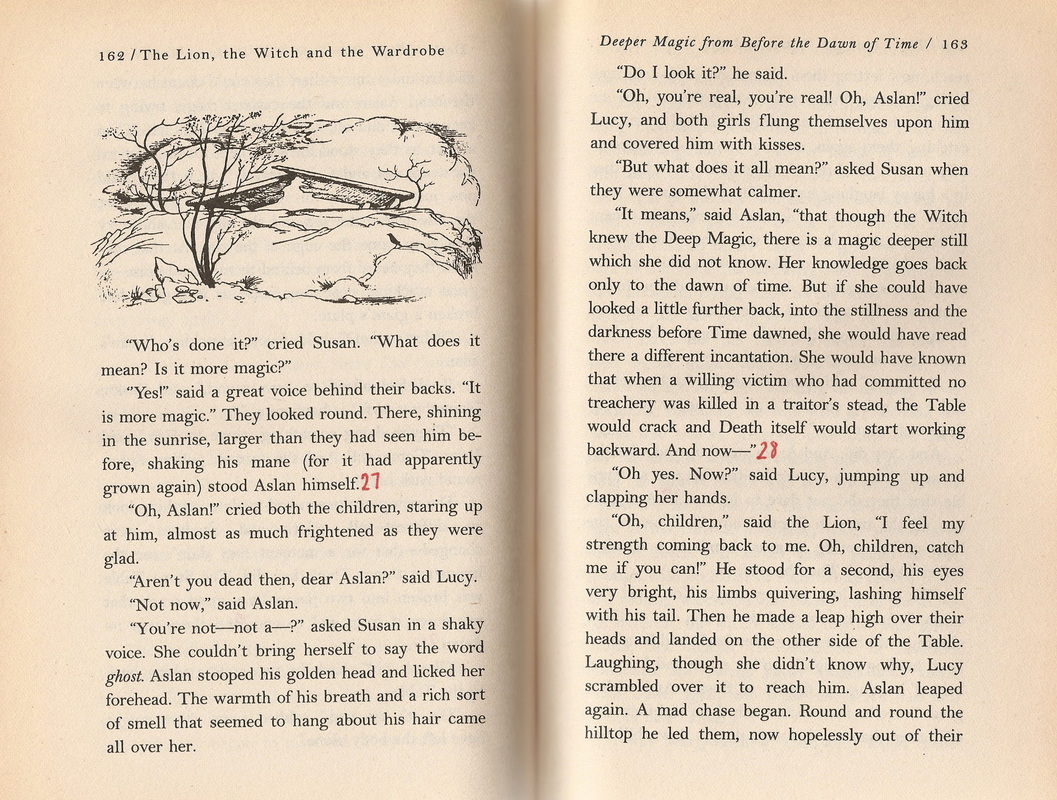 27.     Like Jesus, Aslan has been resurrected from the dead because he died to save others.
28.     Aslan’s knowledge of what happened before the dawn of time further sets him apart from other characters as a god-like figure. 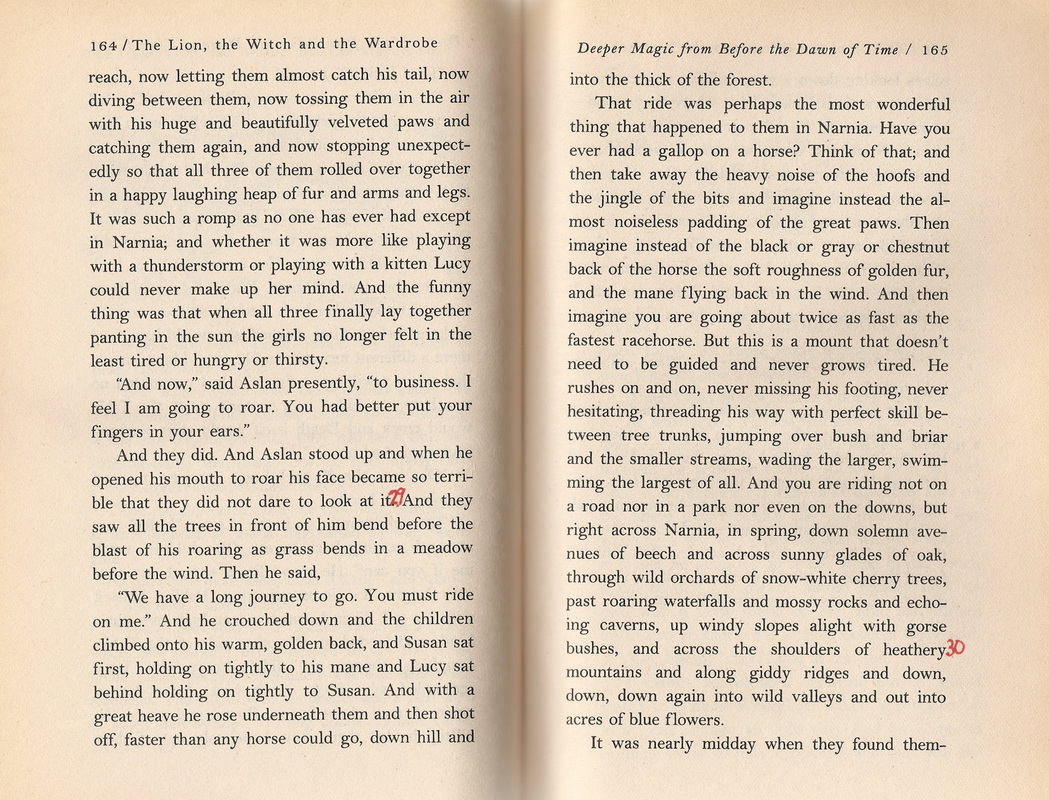 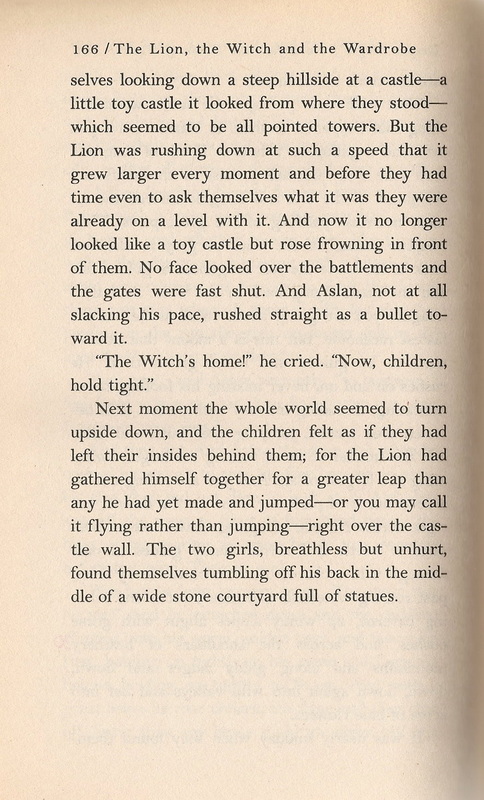